Nightlight IR Detector Hack
This hack is so simple that, if there were a Book of Hacks, this one would be found at the top of the first page of Chapter 1, Volume 1. Infrared (IR) is electromagnetic radiation with a frequency lower than red light (infra means below) and higher than microwaves. Because infrared is not visible to the human eye and can pass through opaque objects, devices that utilize it can be difficult to troubleshoot. Moreover IR can be a health hazard because it won’t trigger the eye’s blink reflex. Many nightlights use a photosensitive circuit element to automatically switch a light source on or off when the ambient light level falls below or rises above a certain threshold. These photosensors are often still sensitive well outside the range of visible wavelengths which means they can be used to detect some types of IR.

The next video shows the nightlight’s response when it is irradiated by an IR jammer. The purple light captured by the camera is not visible to the naked eye. Notice how the nightlight doesn’t flicker when lit by the IR jammer like it does when lit by the remote control. The flicker is a result of the remote control turning off it’s infrared LED while it pauses before resending a code.

Placing an IR pass filter over the photosensor allows the nightlight to be used as an IR detector even when the ambient light level is above it’s normal cutoff threshold. I tested two kinds of black electrical tape and one type of red electrical tape as IR filters, but both failed. I had success in using IR plastic, taken from my electronics junk box, to block out enough ambient light to turn on the nightlight while still allowing directed IR to pass and turn out the nightlight. However, the filter would not stop directed blue LED light and red laser light from turning of the nightlight.

Final Thoughts
Some green lasers from unscrupulous manufacturers emit a potentially hazardous amount of infrared. By a clever use of filters or a diffraction grating it may be possible to use a nightlight as an IR hazard indicator.

I think science educators may find photosensitive nightlights to be inexepensive yet useful tools for demonstrating concepts like transducers and detecting light beyond the range of human vision. 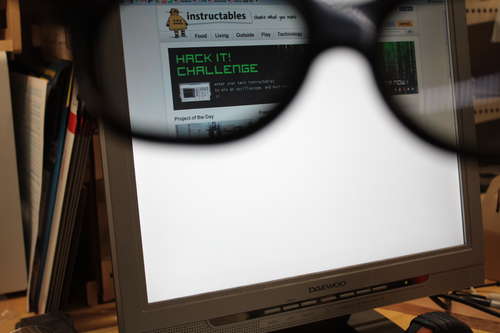 Finally you can do something with that old LCD monitor you have in the garage. You can turn it into a privacy […]